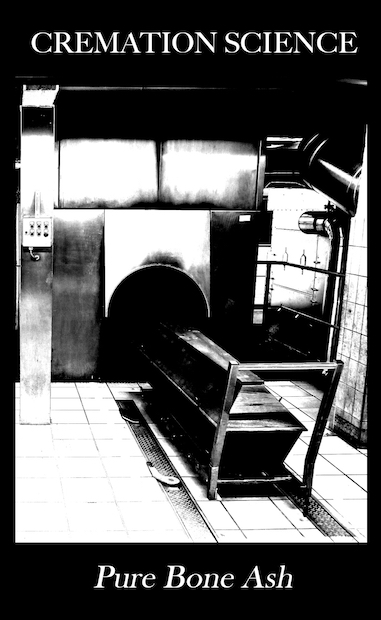 Sweden’s Pierre B Jonsson has been performing experiments in industrial noise since the late 90s, but it was not until the late 2010s that this sequestered anchorite decided to begin sharing his demonic findings with the world. In addition to releasing under his own name, he has employed a range of pseudonyms, among them VÄRLDSBRAND (see BirthControl06, 2019’s split CDr with ABUSE POTENTIAL), DÖDENS VÄDERSTRECK (see BirthControl03, the ‘I De Världsuppslukande Vågorna Av Eld’ C90, also released in 2019), GALGBACKEN, ICKE-GLÄDJE, INSTRUMENT OF TORTURE, MPK877, NIGHTMARE KULTURE, NIHILISTIC ENTOMBMENT OF A DISMEMBERED CORPSE, THE PROVOCATEUR, and UNATTESTED. In just a few years he has built up an impressive discography of releases on a variety of small labels as well as through his own Hidden Words Productions imprint.

Today we’re pleased to announce this prolific artist’s third outing with Birth Control Productions, this time in his CREMATION SCIENCE manifestation, a project that debuted in 2020 with the ‘Bleeding Earth Dry’ tape on Solium Records.

The ‘Pure Bone Ash’ C40 [BirthControl10] contains 4 potent 10-minute emanations of dry and morbid industrial harsh noise, evoking a journey through a world without hope, beginning in rage and ending in numbness. There are some elements here of the ritualistic sound associated with the VÄRLDSBRAND moniker, but these cuts are entirely more necrotic, their carefully-controlled violence interred within a bleak, crypt-like atmosphere. Fans of PROIEKT HAT, ATRAX MORGUE or MOLOCH’s ‘Humane Too Sheeps’ album will very much enjoy this material.

‘Pure Bone Ash’ is for sale now in a hand-numbered edition of 50 professionally duplicated cassettes with double-sided glossy j cards. Copies are €5 / $6 each.

Orders can be placed through Discogs (link), Storenvy (link), or by direct email to birthcontrolproductions@gmail.com. Ships from Ireland.

No digital download of the album will be made available, but one track can be heard on the BCP Soundcloud page: