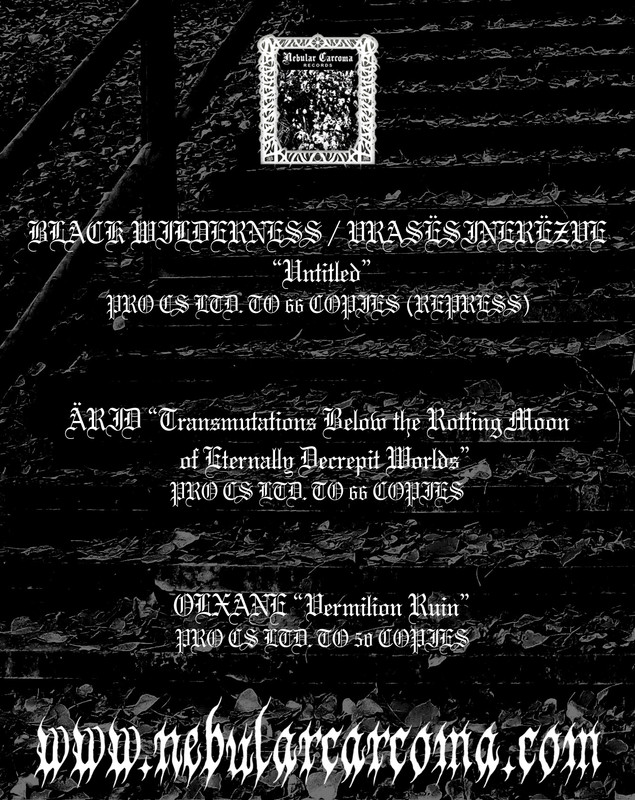 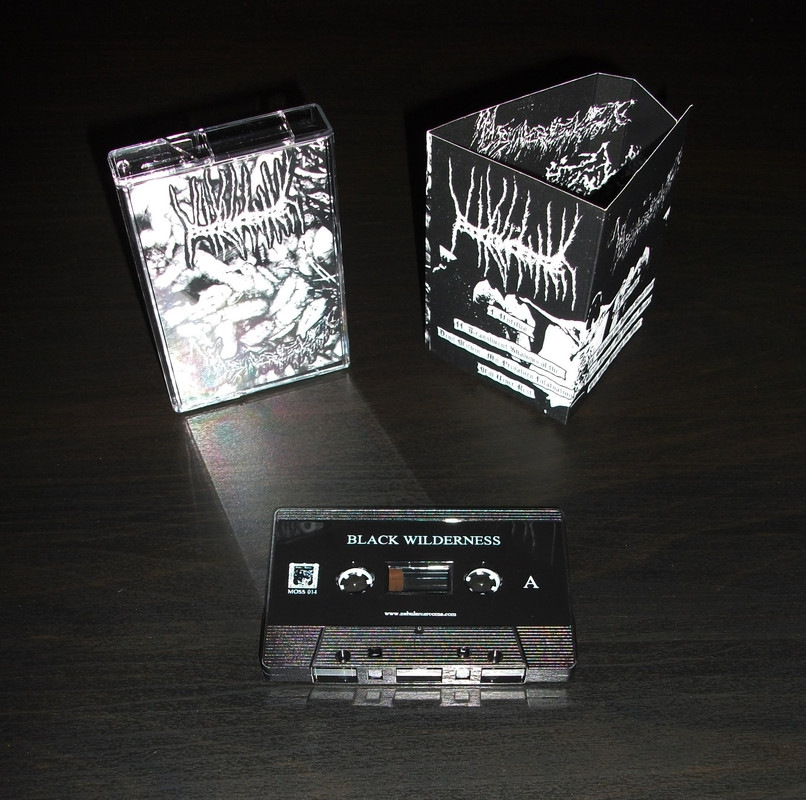 4 lost laments of spectral dark ambient. Horrible and claustrophobic, only for tormented souls. 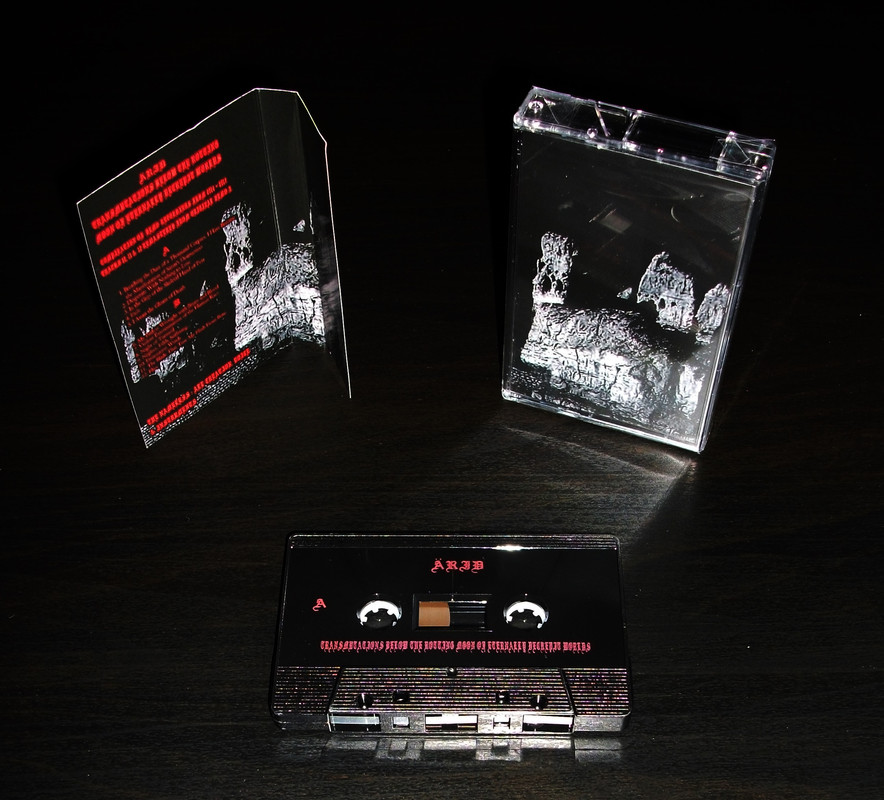 First ever compilation of demo works from this obscure US entity of raw and rotten Black Metal. 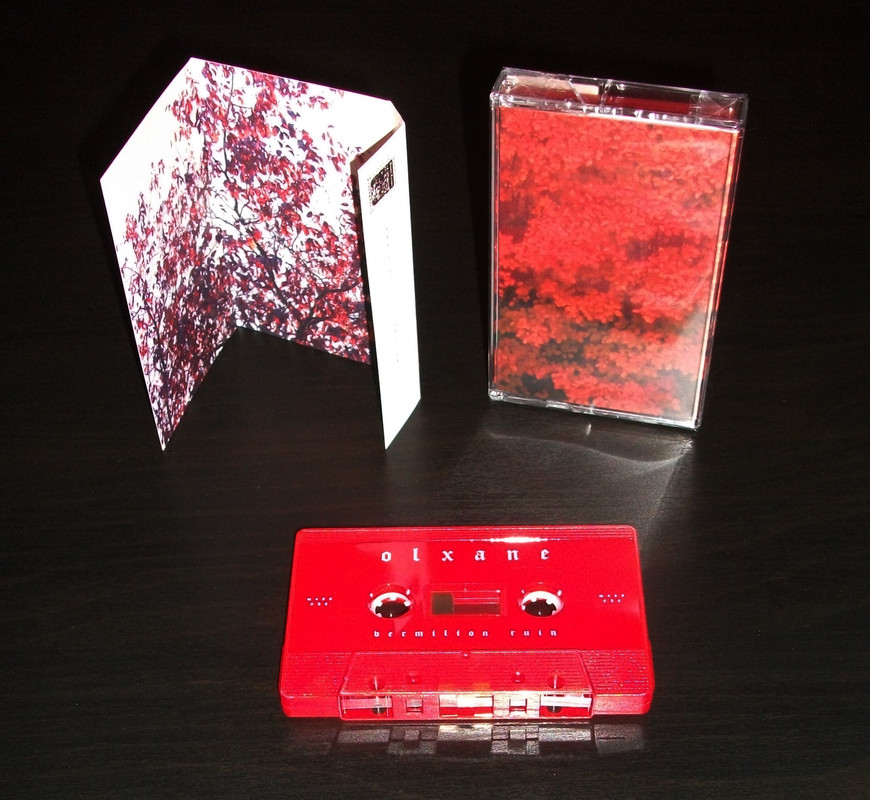 Olxane is back with a new demo, this time based on the autumnal season. High quality Atmospheric/Raw Black Metal from The Netherlands.

Re: CANDELABRUM - Portals & Necrotelepathy out now! 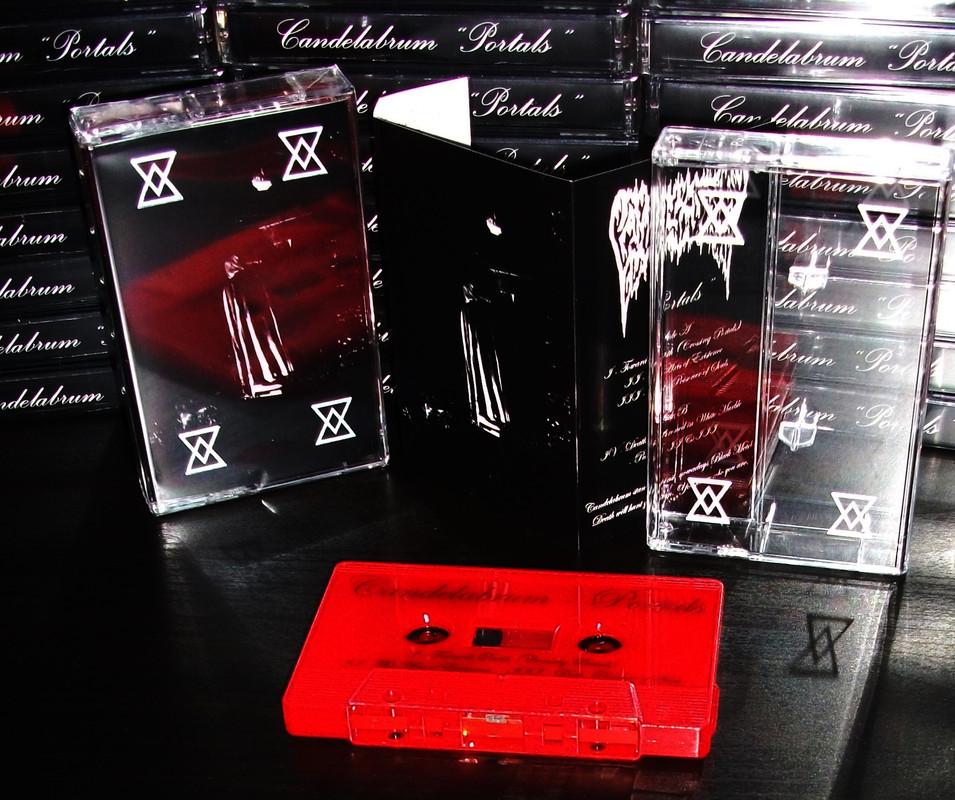 Pro Tape with silkscreen sigils printed on the case. Limited to 111 copies. 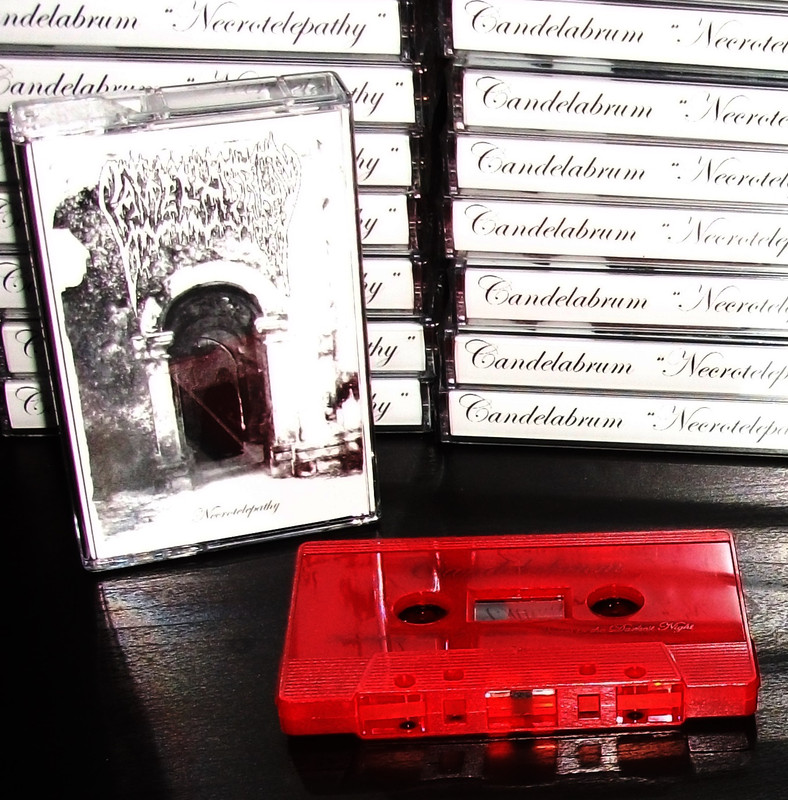 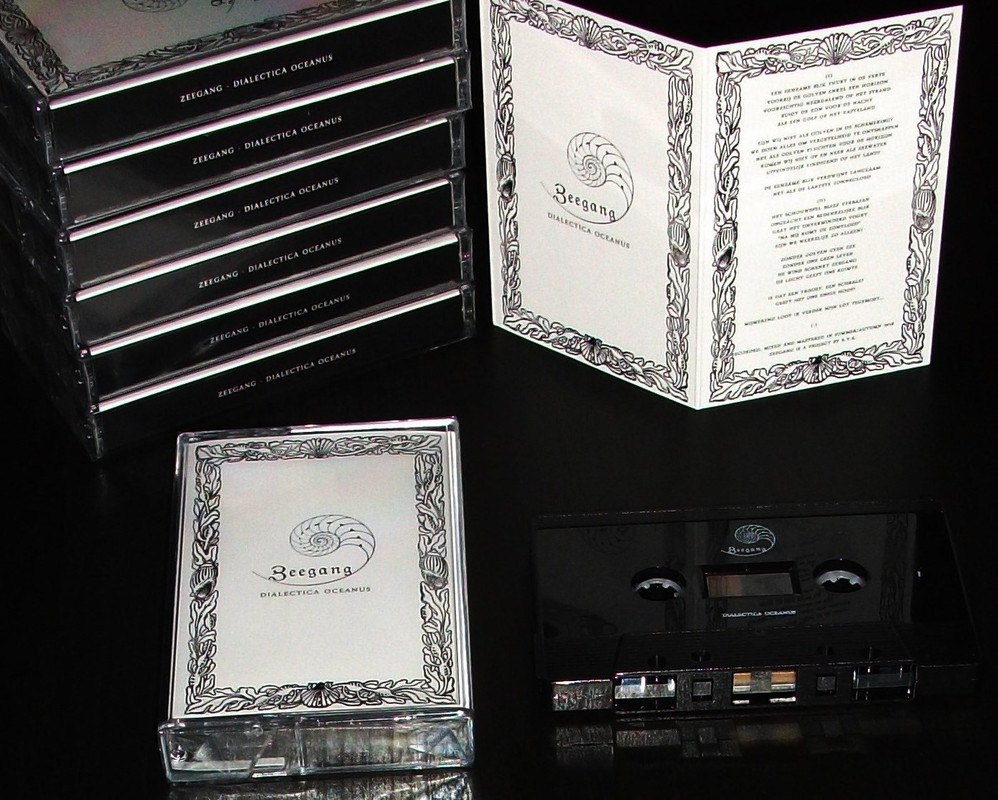 Cassette full-lenght by this new Dutch project commanded by R.V.R. 2 long tracks of solemn Black Metal with an aura of reflection. 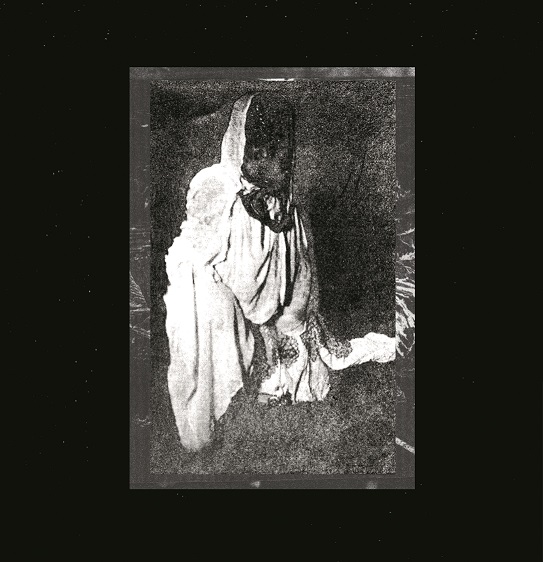 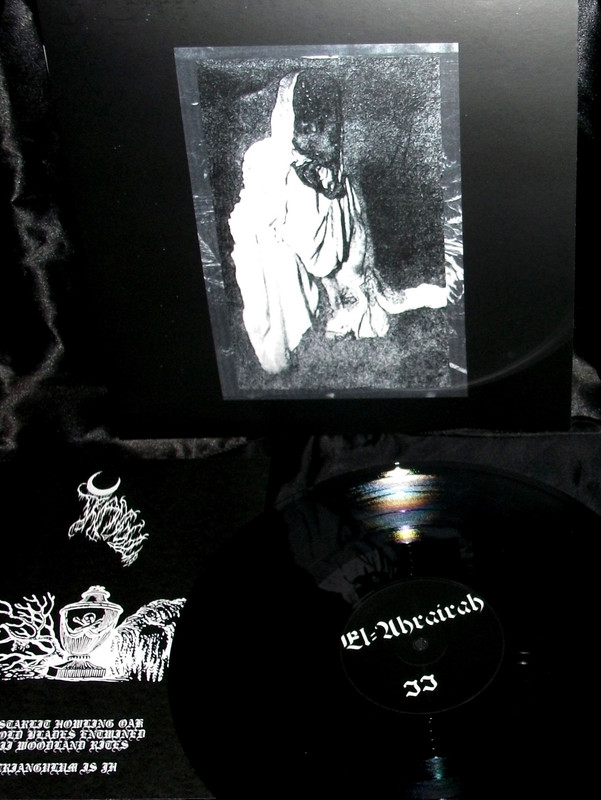 Operating somewhere deep in the Rust Belt, TRIANGULUM first appeared on the ouroboric split tape, Northern Occultism, released during the opening of the second decade of this final century. Nine years later, their obscure and aggressively melancholic black metal binds itself stronger than ever onto listeners who would fall into it. Providing zero information regarding the time or whereabouts of their provenance, the solo artist behind TRIANGULUM opens this split with three never-released tracks of hypnotic black metal tormented by harsh vocals buried in the red.


A year before the second decade, EL-AHRAIRAH released their self-titled demo tape: A raw scream from a fledgling bloody but rejoicing somehow, something none of us had ever heard of before—at least not from the states. The next three years saw the Midwestern act remain true to their lapine nature, releasing six tapes before, as if suddenly spooked, they retreated underground. Now a trio, EL-AHRAIRAH return once again, three years since releasing their capstone debut full length on a criminally limited number of cassette tapes. Closing out this split, their side counts three new songs of their uniquely triumphant and celebratory take on distant lands-borne black metal, plus both an intro and an outro of illusion-inducing dark ambient.


The different journeys over the years of these two underground bands mark eerily similar paths. Taken together, this split seems almost destined. Both reemerged around 2 and 3 years ago, and now, owing to a mutual respect between everyone involved, the TRIANGULUM / EL-AHRAIRAH split 12” vinyl is finally here. New material from either of these reclusive stateside acts demands attention, but a pairing such as this warrants immediate genuflection. That each side represents the best material either band has produced will bang out objectively from the black vinyl. 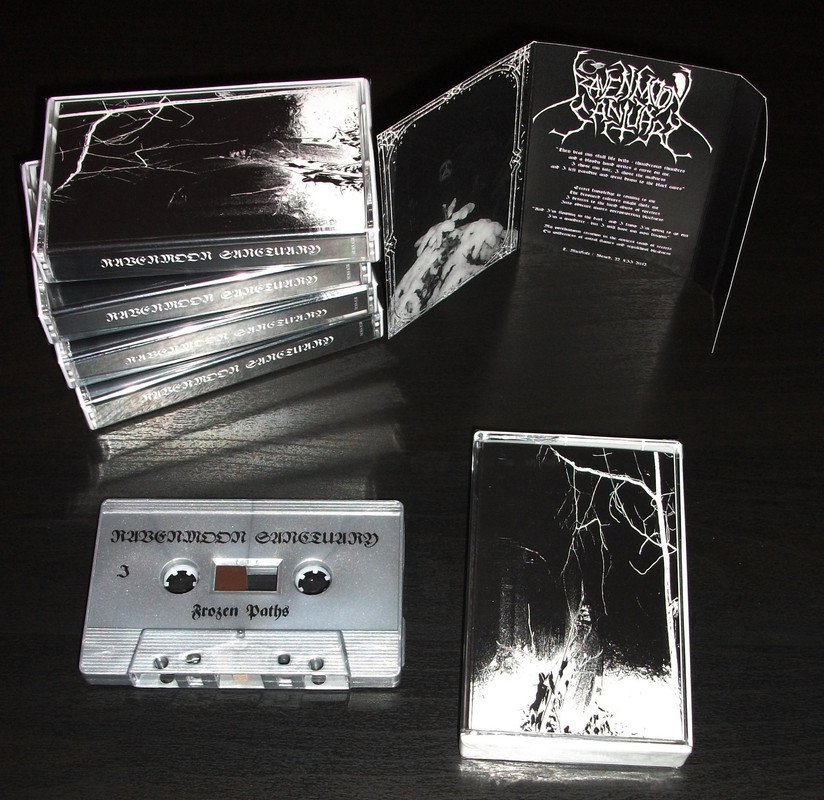 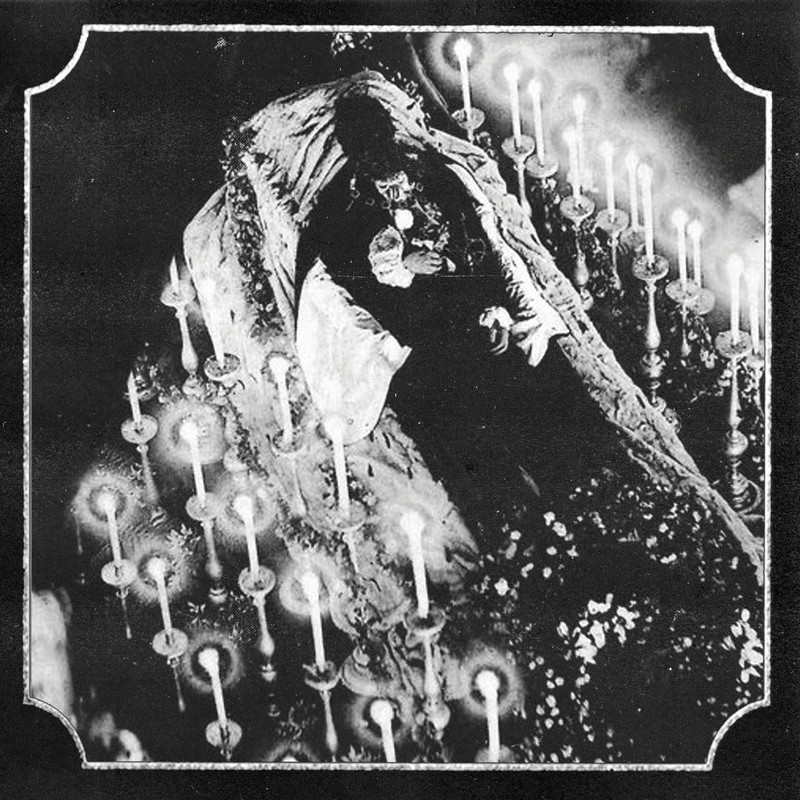 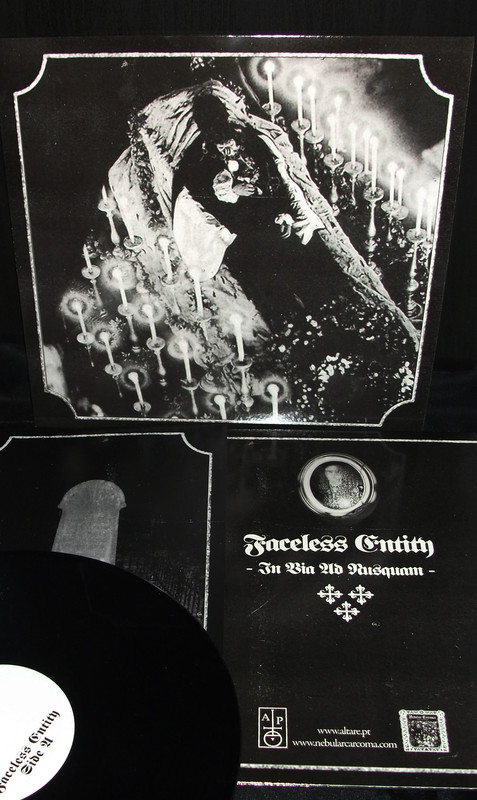 [Debut full-length LP available again. A bleak and spectral tome of nightmarish and horrible Black Metal from the depths of the abyss.

Forever mourning the dead and the living...

Co-released on 12" format, in conspiracy with Altare Productions. 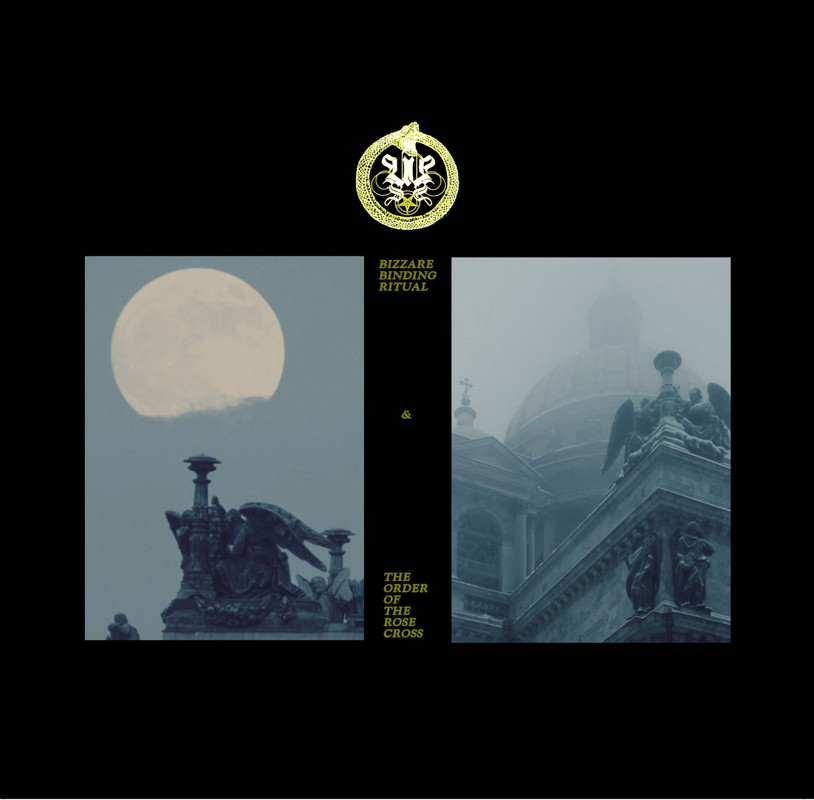 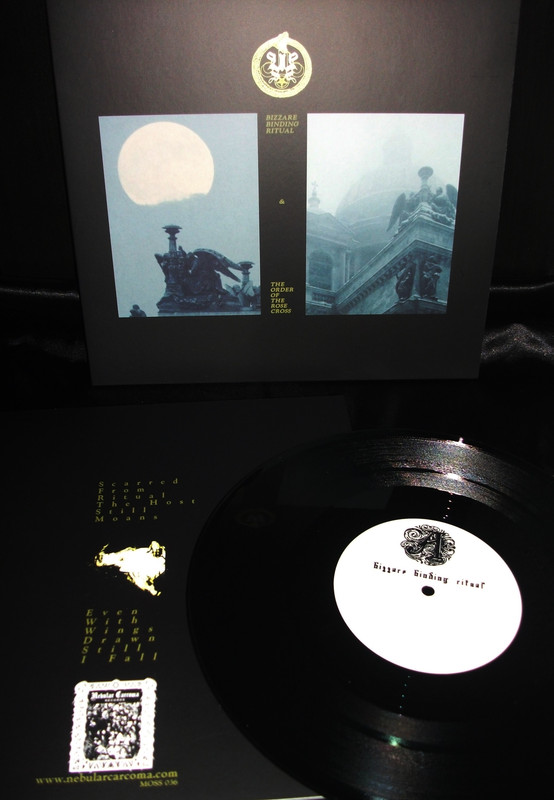 i10" vinyl compilation from one of the preeminent bands in the US Black Metal underground. 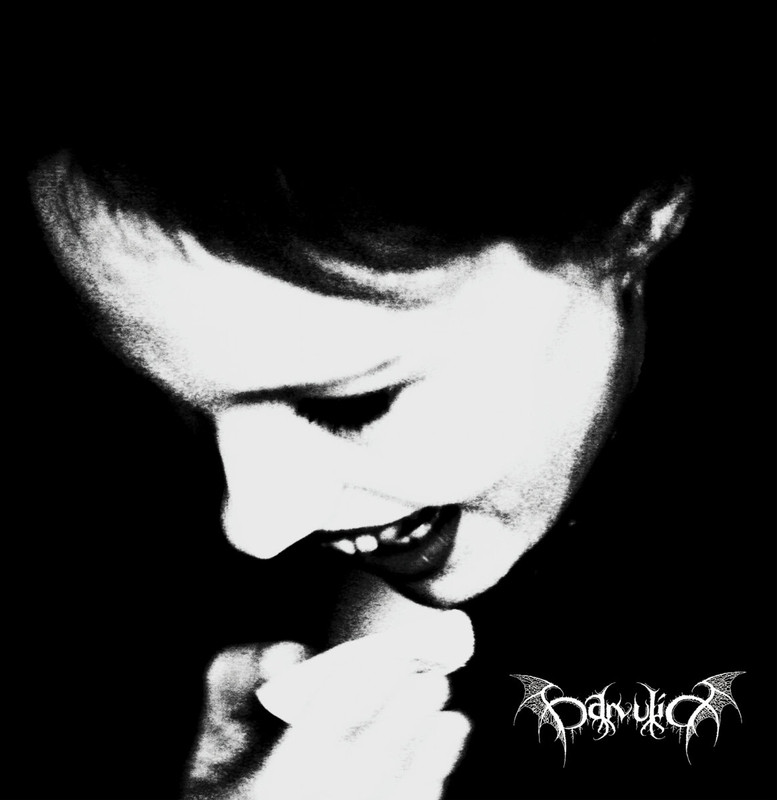 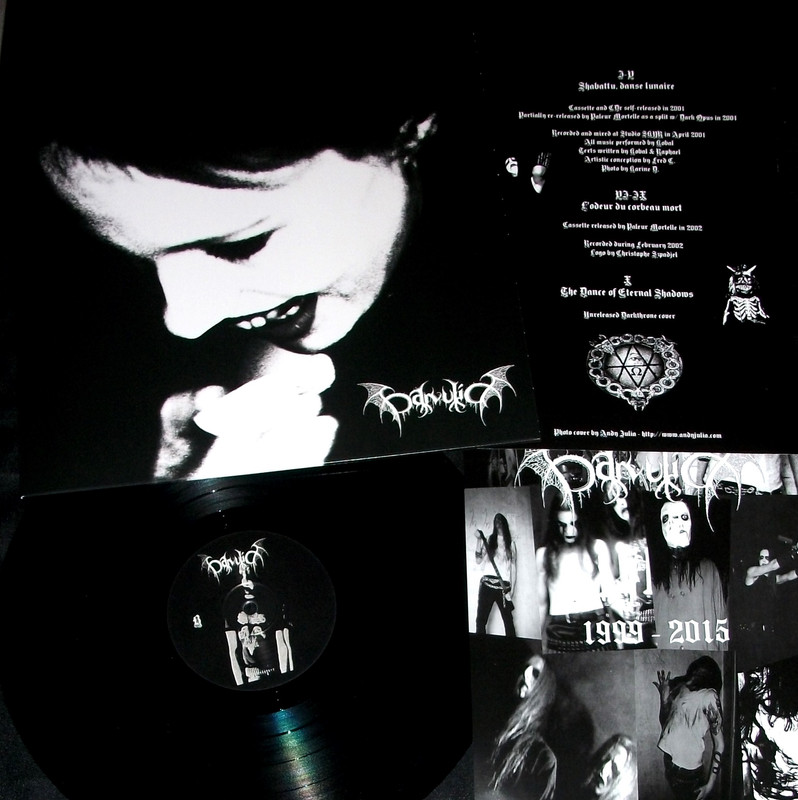 For those who dwelled in the '90s black metal underground and intrepidly moved into the new millennium knowing that foul changes were afoot, all contrary to notions of true "black metal" being supposedly "dead" at the time due to its progenitors breaking up or (mostly) moving on to careerist aspirations, DARVULIA should need no introduction. However, considering the band formed in 1999 and went to the grave 16 years later, perhaps a refresher is in order...

DARVULIA hailed from the esteemed French black metal underground - and by "French," we mean the lineage that started with the Black Legions and then carried forward with the likes of Osculum Infame, Blessed in Sin, Funeral, Bekhira, Seigneur Voland, Hirilorn, Winter Funeral, and very early Seth - that would blossom into something else entirely as that new millennium went on. Old souls from the start, DARVULIA honorably maintained the ripped-raw sickliness of the Black Legions with the more medieval atmosphere of that second generation, in effect keeping the flame burning for both distinctly French paradigms. Their infamy in the underground largely hinged upon their albums, starting with 2002's L'Ombre malicieuse (on the supremely cult D.U.K.E. label) and then 2005's L'Alliance des venins and 2010's Mysticisme macabre. As can be surmised by that chronology, DARVULIA patiently parceled out their creations, prizing quality over quantity, and not once misstepped during their existence.

It can be successfully argued that DARVULIA's full-lengths portray the band at their most developed - or, conservatively speaking, at their most professionally recorded - but where the stench of true black metal is at its foulest is generally a band's demos, and the same can be said for DARVULIA. Thus, NEBULAR CARCOMA is devilishly pleased to compile the DARVULIA demos Shabattu, danse lunaire (2001) and L'odeur du corbeau mort (2002) plus an unreleased Darkthrone cover ("The Dance of Eternal Shadows") onto a full-length vinyl LP, hereby titled Acte Dix: Démos. This collection displays DARVULIA at their rawest and most unadorned, yet within such a seemingly hideous soundscape does a remarkable sense of refinement exist. Even this early on, these French vampires maintained a uniquely malaised sense of melody, owing in part to the diseased groundwork laid by Mütiilation (certainly not a secret influence: just look at the cover of L'odeur du corbeau mort), but arguably more drugged-out and delirious than their not-inconsiderable forebears. Of course, there existed within DARVULIA's world a perverted sense of vampirism, much like there was during the days of the Black Legions, that was far, far away from the circus "black metal" created by certain top-hatted clowns. But, within the rosy glow of context, we can justifiably assert DARVULIA's vampiric black metal here is as pure and proud as it comes. As time inevitably moves on and the past becomes a distant memory, rekindled torches need to shine light on the darkest corridors of that past. As such, NEBULAR CARCOMA is exhuming the corpse of DARVULIA and reanimating their black-leather wings with this noble vinyl edition of Acte Dix: Démos. 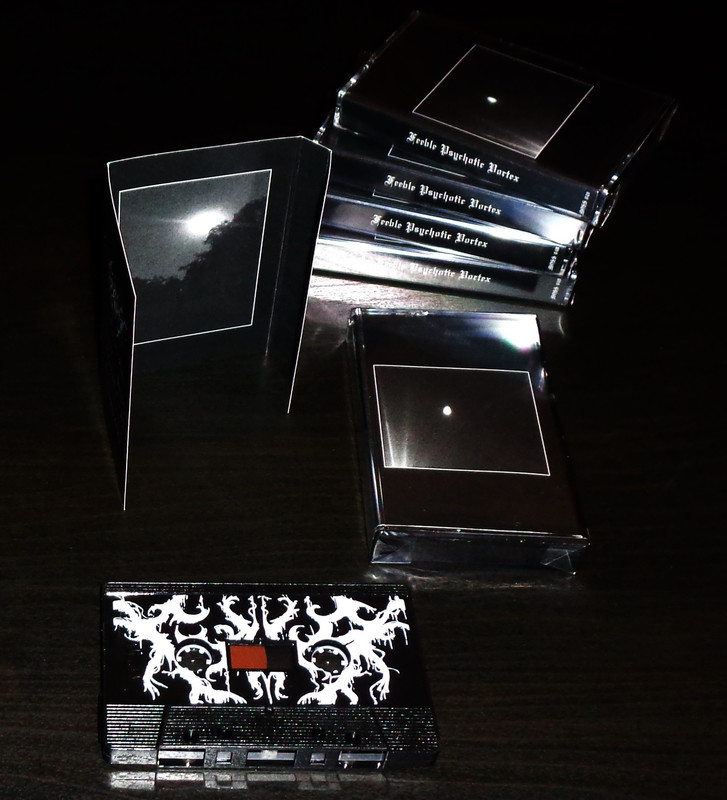 Originally released last year on CD and LP by Portugal's elite Altare Productions, Gaua's Feeble Psychotic Vortex was a startling first fuller-length strike from this still-young Spanish entity. Ever aptly titled, the 37-minute Feeble Psychotic Vortex indeed sends the listener into a vortex of wild, wounded emotion and raw, red hatred, all transposed onto the grimmest black metal. Both malevolent in its marching melodicism and favorably punkish in its fury, each of these four epic-length tracks sees Gaua bewitching with hypnotic ease, all culminating in a massive 'n' mesmerizing cover of Vlad Tepes' classic "Drink the Poetry of the Celtic Disciple," extending that song's malodorous ecstasy to a staggering 14 minutes.

Naturally, that choice of cover should say more than enough about Gaua's aims and intentions. Do not enter the Feeble Psychotic Vortex lightly! 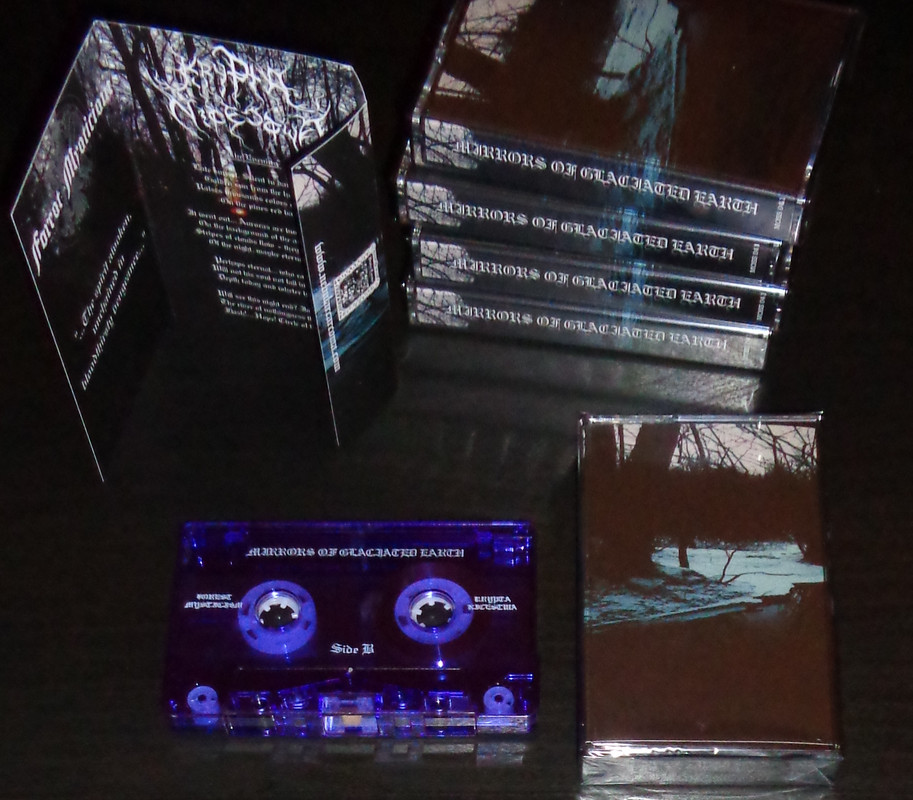 Featuring an exclusive track by each band and then a "raw mix" of each, Mirrors of Glaciated Earth is truly titled: indeed is it an ominously reflecting pool of cold, obsidian glory. Poland's Krypta Nicestwa start Side A with "Wieczor," a haunting hymn duly displaying the band's geographical constitution. Although a relatively new entity, Krypta Nicestwa honor their noble roots with a grim 'n' mystical sound that's poignantly Polish in a most mid-'90s manner. Australia's Forest Mysticism follow next with "The Spirit Awoken." Arising from the dead in 2018, this song is the band's first new recording since last year's all-too-short Hearken EP. And although just one track, "The Spirit Awoken" is an absolute firebrand of a song, Forest Mysticism's breathtaking bravado once again resulting in pagan black metal of the highest order. On Side B, then, comes rawer iterations of both bands' respective songs, with Forest Mysticism's contribution first and followed by Krypta Nicestwa, altogether instilling an alluring delirium truly worthy of the title Mirrors of Glaciated Earth. 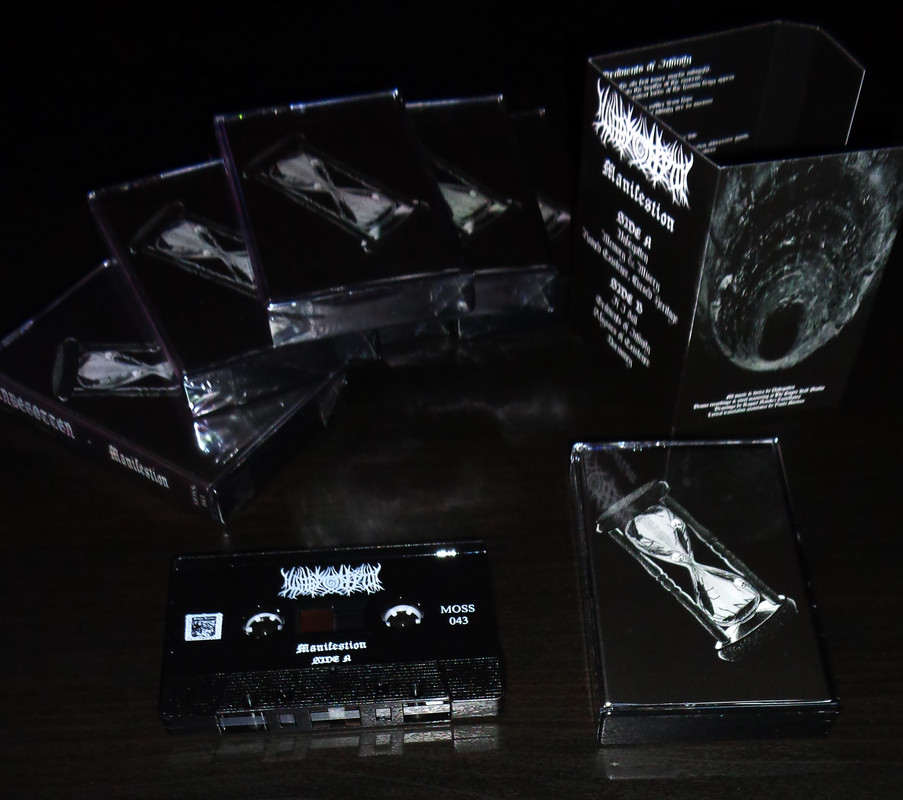 Unbegotten are a mysterious entity hailing from the increasingly potent Spanish black metal scene. The band made their public debut with the Proem of the Unborn demo in 2016. A catacomb of hateful energy, Unbegotten's opening salvo swiftly delivered boundless darkness and raw obscurity, instilling the rank stench of the ancients despite being a brand-new formation.

After three years of uncompromising coldness, Unbegotten return with their next recording: at last, a full-length bearing the title Manifestion. Originally released on vinyl by the esteemed Altare Productions, Manifestion malodorously displays the full bloom of Unbegotten's promise. Hateful and hysteric, the insistent surge across these seven tracks creates a clanging delirium that sounds less like traditional black metal and more like the ethereal echoes of agonized spirits dwelling in the deep. Suitably, Unbegotten keep their attack righteously raw, and yet each instrument is fully felt, especially the ominous tones of actual bass guitar; every note seemingly bends and breaks, the yawning maw of infinity turned miserably melodic. Manifestion is thus a cacophonous symphony of spectral anguish, moonlit mysticism given over to feral, lycanthropic hunger.

The dungeons are calling again, and Unbegotten's Manifestion now returns to the shadows on cassette tape. 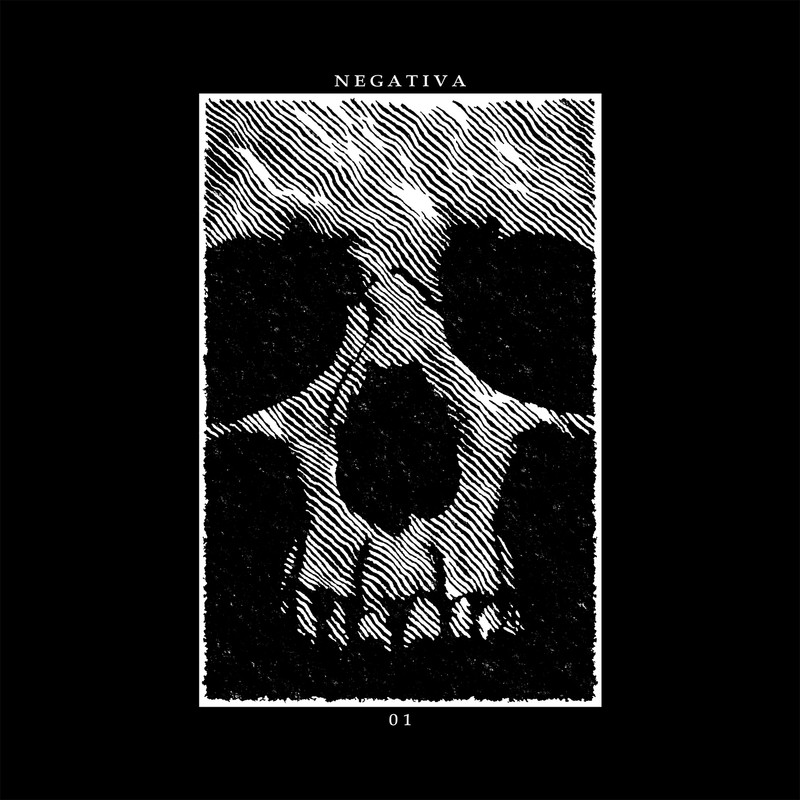 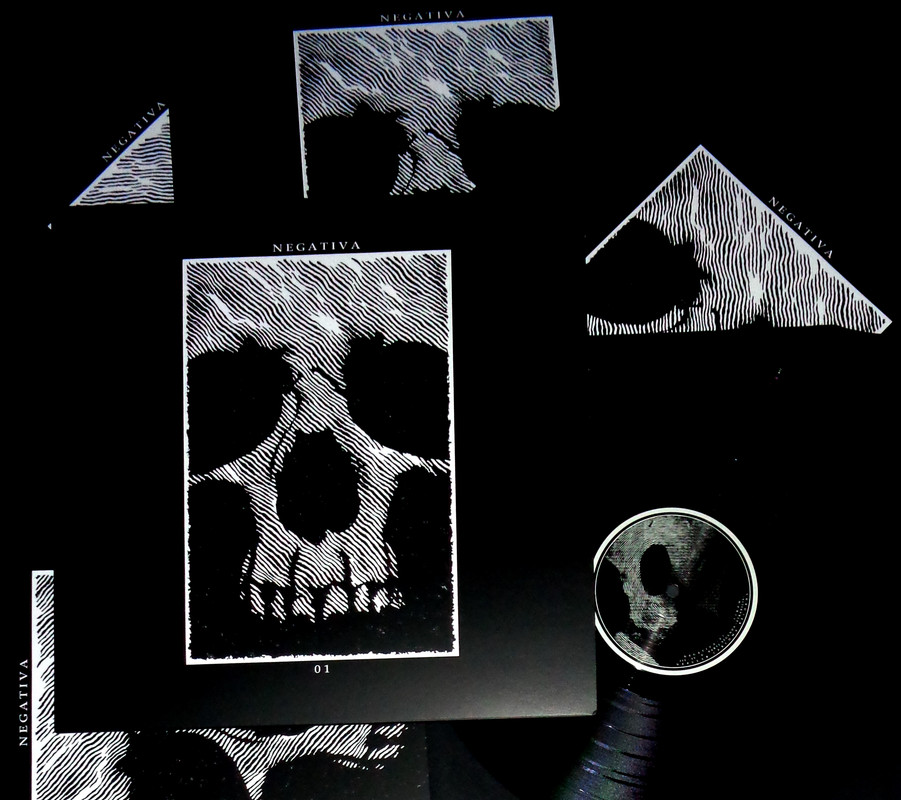 Negativa are a prolific and mysterious force hailing from Spain. The entity's two central figures, multi-instrumentalist DB and vocalist D.R., respectively maintain the well-regarded Délirant (of the Mystískaos cabal) and Atrabilis. Together, as Negativa, do the duo create delirious, tortured, but credibly avant-garde black metal, worming deep within atonality and tension to find bittersweet resolution and maimed 'n' malformed melody.

Of the band's prolific clutch of releases, arguably, Negativa's 01 is the perfect distillation of their aesthetic, a shocking bolt-from-the-blue originally released in 2014 on super-limited cassette. The soundfield is sharp, almost crystal-clear, but somehow alien and unsettling. Their push & pulse takes on a folding-inward variety of shapes, vortex-like, building ever-denser and -taller walls around the listener. Suffocating yet emitting a paradoxical expanse of space, the four-song spell hypnotizes from there; each body/mind-fold sluices energy and happiness from the spirit, Negativa's obsidian metallics growing stronger with each passing, parasitic minute. By the end of 01, that listener is literally rendered a zero, a hollow shell of cursed corporeal garbage.

Seek the beginning of the end with this noble new vinyl edition of Negativa's 01 and rue its rotten (re)discovery.